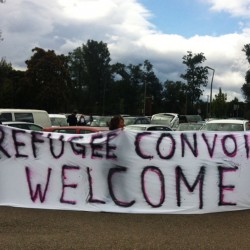 By storming the barricades at Budapest’s Keleti station and setting out on foot for the Austrian border, Syrian refugees rejected an international refugee system that provides them neither protection nor hope for the future. Thousands have already arrived in Germany as many European citizens rally to their cause. I was at Vienna’s Prater Stadium[…]